The first ever Vipassana meditation course in Germany took place in 1983 in a rented youth hostel near Kassel. Some committed old students, who came across Vipassana in India, organised this very first course. After the foundation was laid, soon other courses followed. It started off once annually at the turn of the year and later on two to three times a year during holiday seasons.

Initially courses were being held in German youth hostels, until at the beginning of the nineties for financial and organisational reasons more and more German courses were also organized in neighbouring countries (including Belgium and France).

The interest in Vipassana courses constantly grew. In 1994 a hotel in Bad Herrenalb was hired on a long term basis, and regular Vipassana courses were offered there till 2002. In December 2000 a property, capable of development, was acquired as a permanent meditation centre in a place called Triebel within the Vogtland area, near the bavarian town Hof and the saxonian town Plauen.

The Vipassana association (incorporated society) was founded in the year 1987, in order to place the considerably grown organisational work under the umbrella of an official non profit organisation and by that meet the rising requirements for administration, accounting etc. The declared purpose of this association is solely to aim for the well-being of the general community in a direct way: by spreading a method, which promotes physical and mental well-being. This method is the Vipassana meditation. The association, which was based in Oldenburg (Niedersachsen) since 1990, has been approved in 1993 as non profit organisation. After acquisition of the new Vipassana centre, the associations base was moved to Triebel. 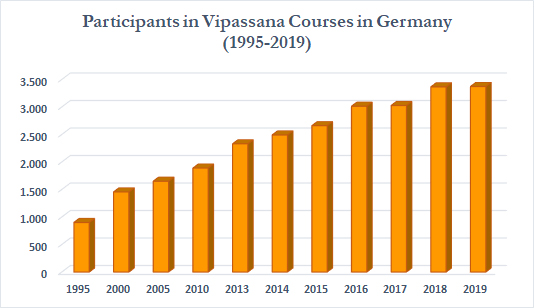 The association works entirely on the basis of donation. Decisions are based on official regulations, transparent to everyone and easily comprehensible. Decisions are made by consensus, which requires agreement of all members and often involves an intensive information exchange. In general, the location for taking decisions is the open trust meeting. Old students therefore have the possibility to contribute to decision- making processes.

The association elects one of its members into the board for the duration of one year. The board consists of the boards chairman, the representative and the board treasurer. The chairman conducts the trust meeting and is responsible for the implementation of decisions. Membership is tied to active contribution. A rotation of members and functionalities is aimed for, to ensure that also other old students get the opportunity to take on responsibility within the association´s work.

As none of the pending tasks can be managed solely by the members, from the beginning onwards, different work committees were established, including course organisation, finances and later centre search, construction and garden, etc.. In these committees the actual work in it´s details and the implementation of made decisions is taking place. They are open to all interested old students. These committees are an integral part of the work. Without the commitment of many old students in those committees, the association wouldn't be functioning.